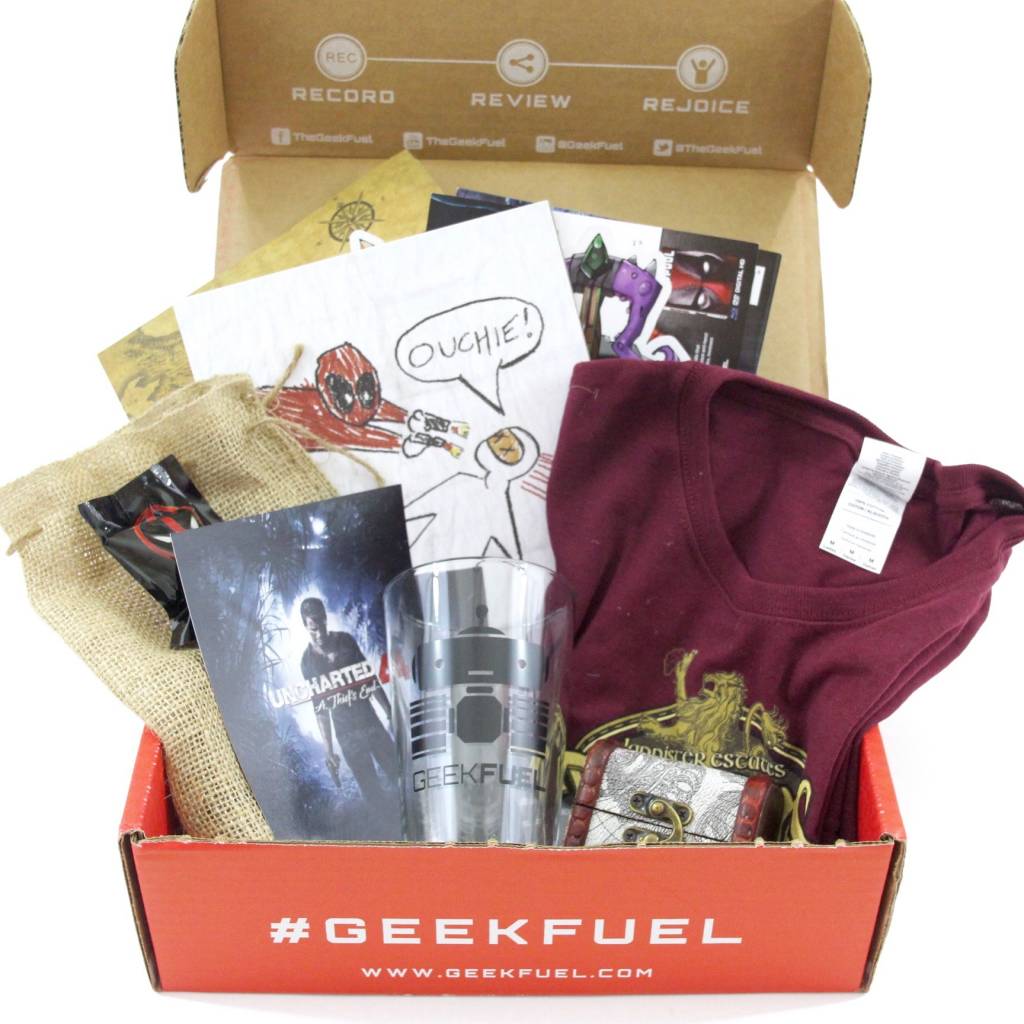 Geek Fuel Review May 2016 – This will be my very first Geek Fuel review so bear with me. I am kind of new to the world of geek/gamer subscriptions, but was very intrigued by this one. Without even reviewing it I can tell that it is one of the better geek subscription boxes on the market. I’ve reviewed enough boxes over the last few years that I can tell a good one from a bad one pretty easily.

If you aren’t familiar with Geek Fuel it is a monthly mystery box of geeky goodness. Boxes will come packed with limited edition toys, collectibles, games, comics, stickers, buttons, and other fun stuff. While the contents vary by month, you will ALWAYS get an exclusive t-shirt and a full computer game (in the form of a Steam activation code) in your shipment. 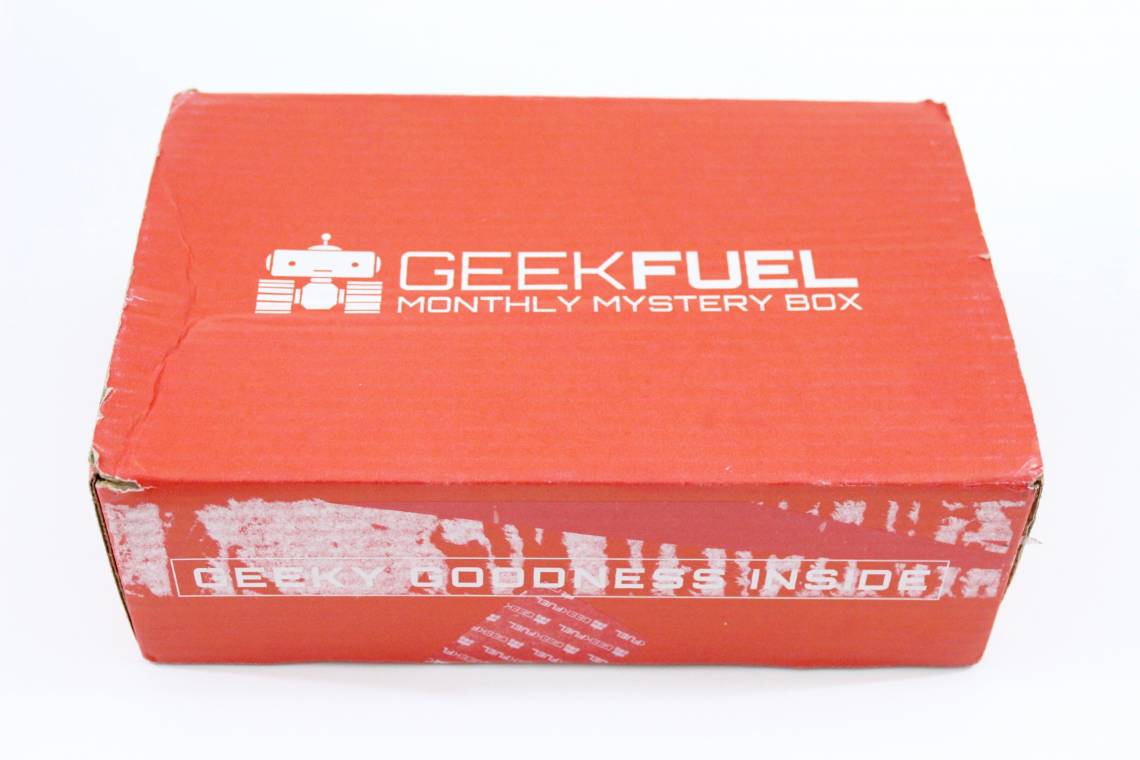 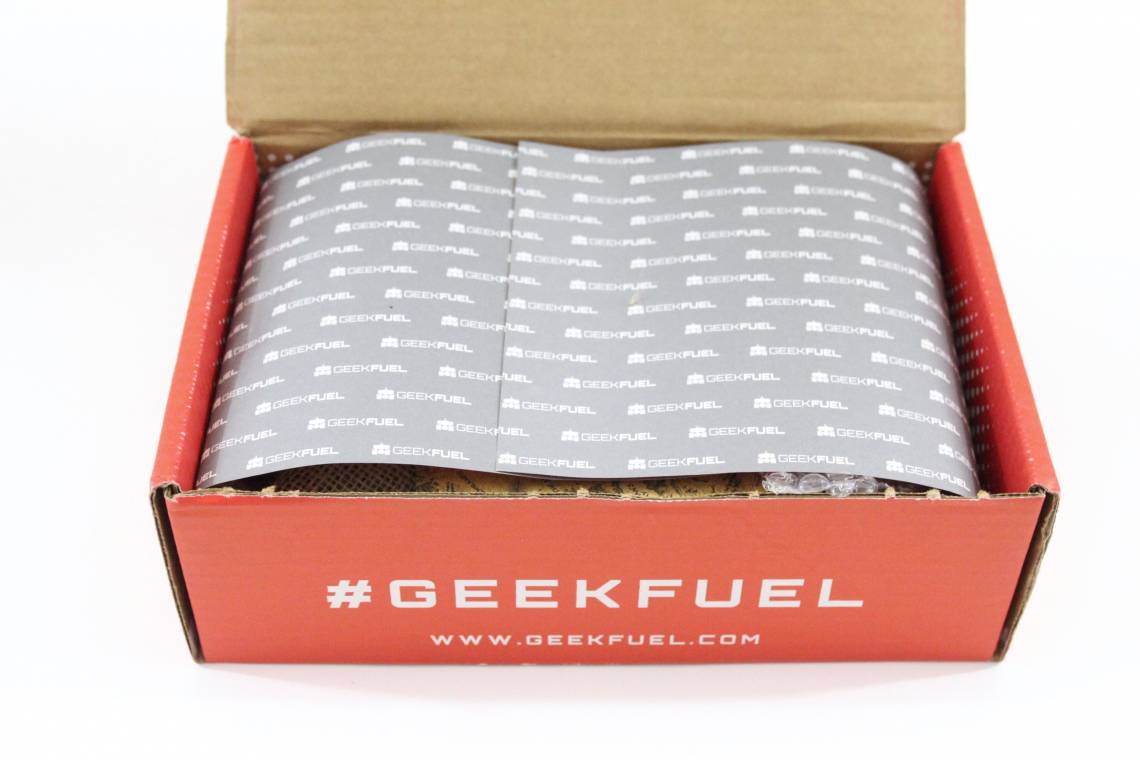 What You Get: Your boxes will come packed with limited edition toys, collectibles, games, comics, stickers, buttons, and other fun stuff. While the contents vary by month, you will ALWAYS get an exclusive t-shirt and a full computer game (in the form of a Steam activation code) in your shipment.

Ships to: US & Canada 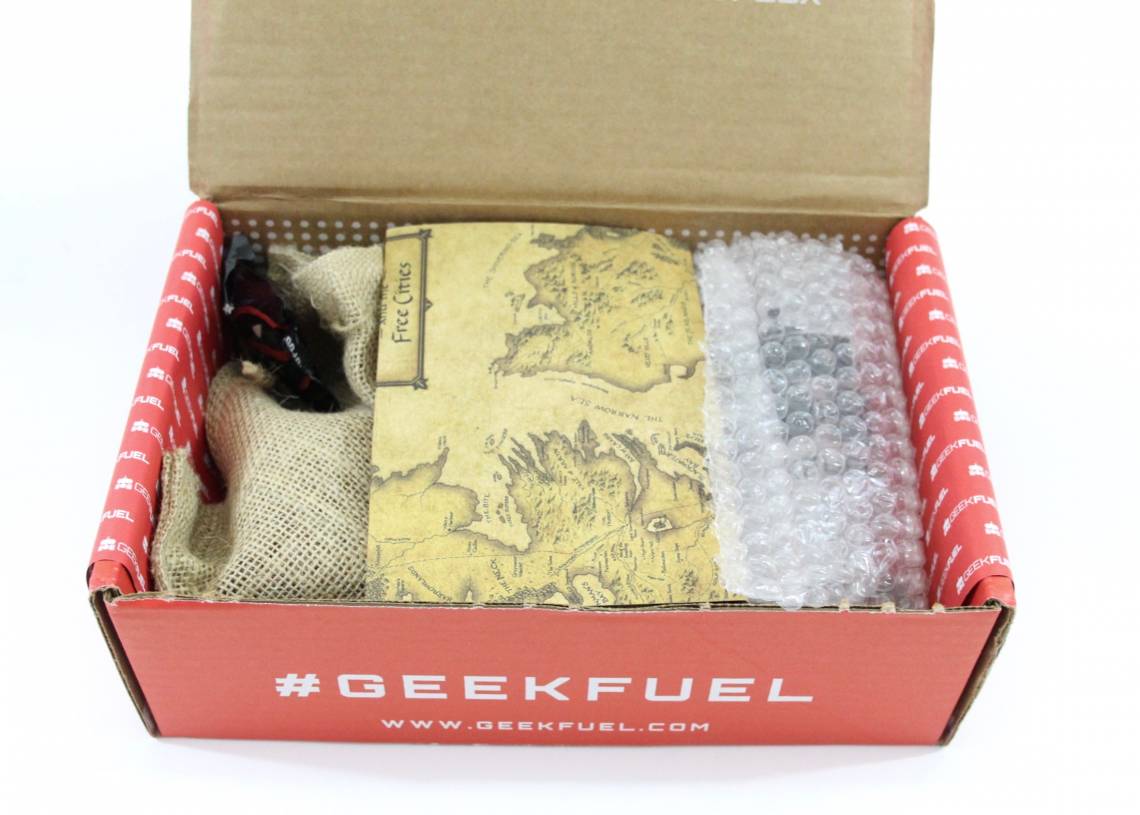 Geek Fuel doesn’t appear to have monthly theme (I could be wrong) but they do have a card detailing the items included. This is definitely going to come in handy because I am not overly familiar with any of these products. The BF makes me go see Marvel and DC movies every now and then, but other than that I am clueless. It also comes with a mini magazine filled with all kinds of info on current and upcoming geeky goodness, this will also come in handy. 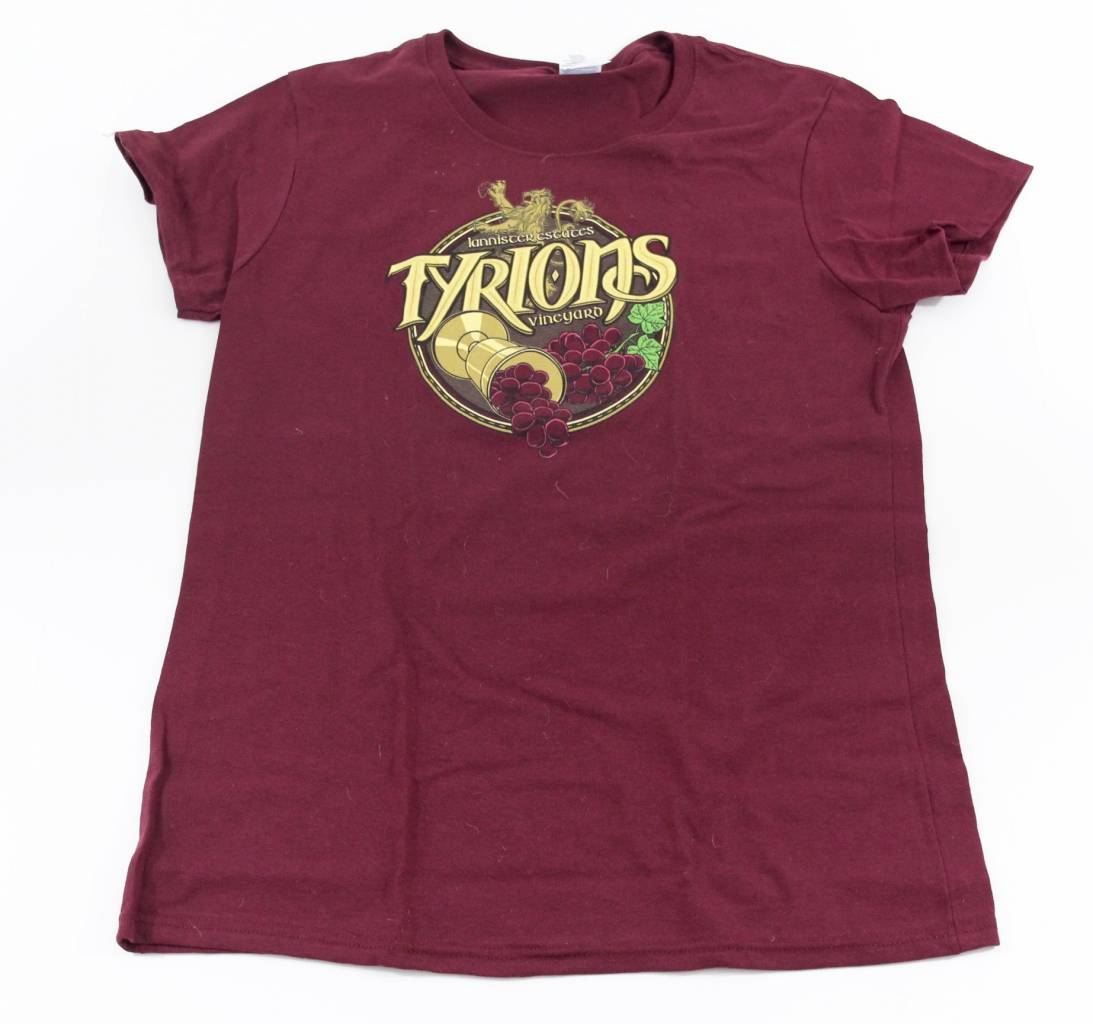 Tyrion’s Vineyard Shirt – Ummmm…..I actually know what this shirt is! I am obsessed with Game of Throne’s and funny enough, I am watching PVR’d episodes while we speak. The product card even has one of my favourite quotes on it – “It’s what I do, I drink and I know things”. They say that the maroon color has been specifically chosen so you can spill a bit and no one will be the wiser…….I LOVE IT! 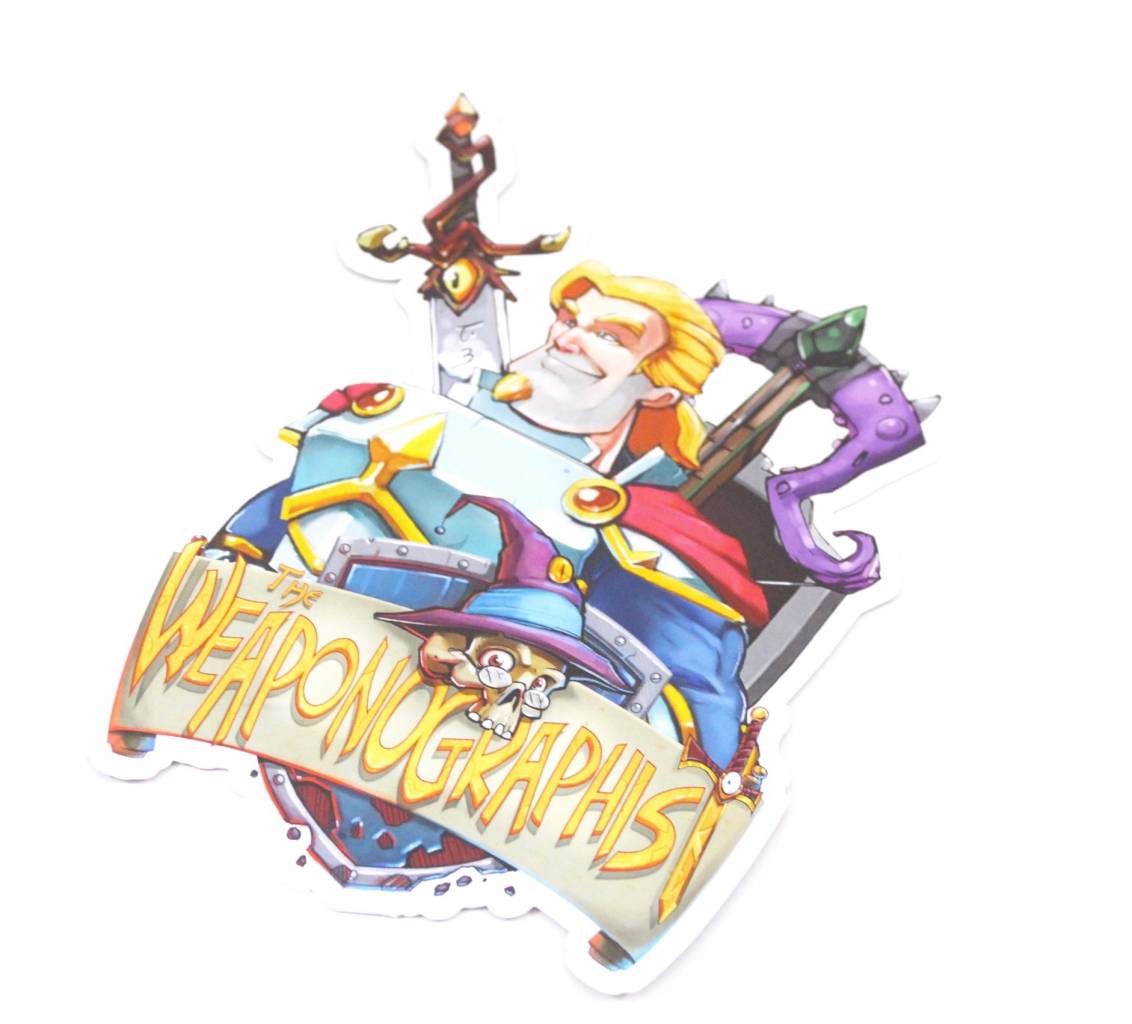 The Weaponographist Steam Game – Each month subscribers receive a downloadable steam game. I have no clue what this is, but I’m pretty sure it adds value to the box. This month we received the Weaponographist which is a high-speed, top-down, dungeon crawling arena game. 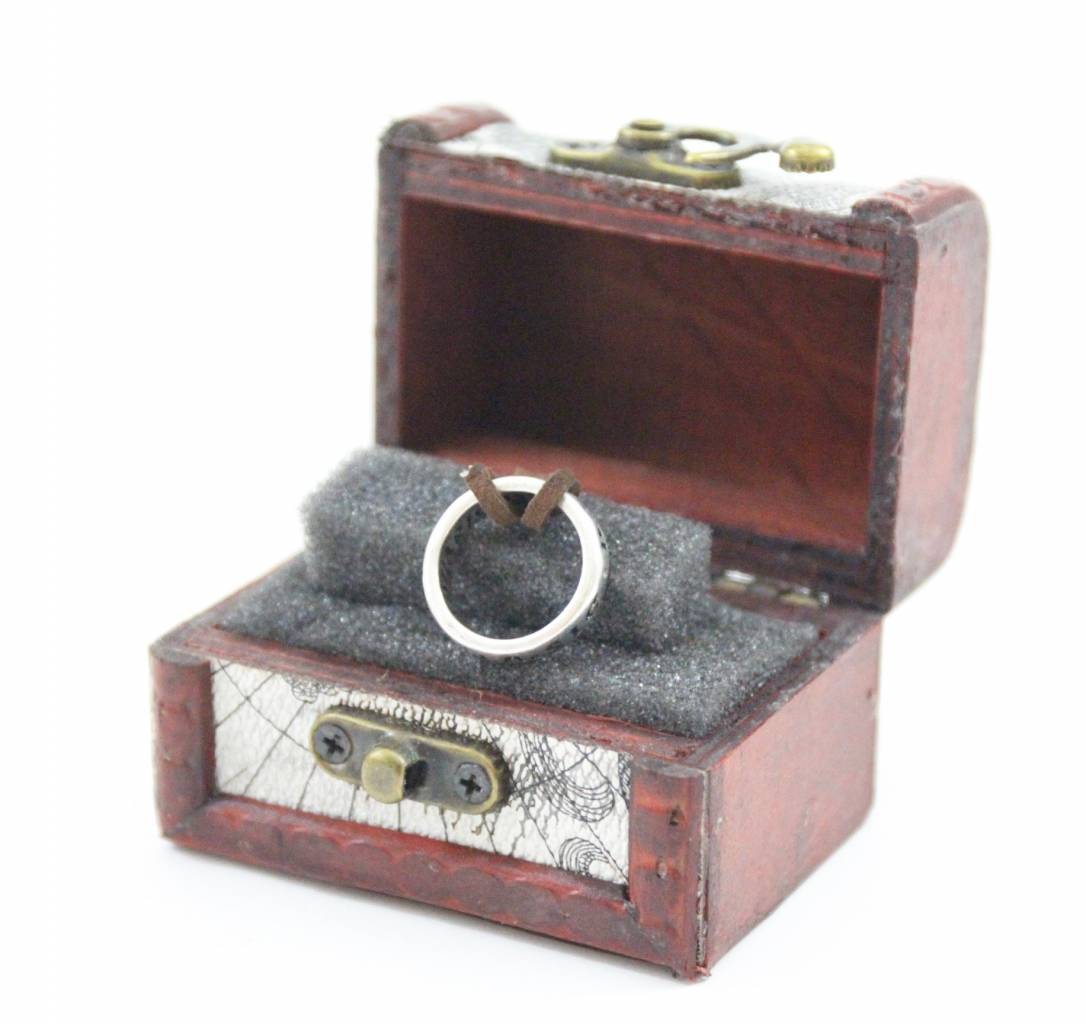 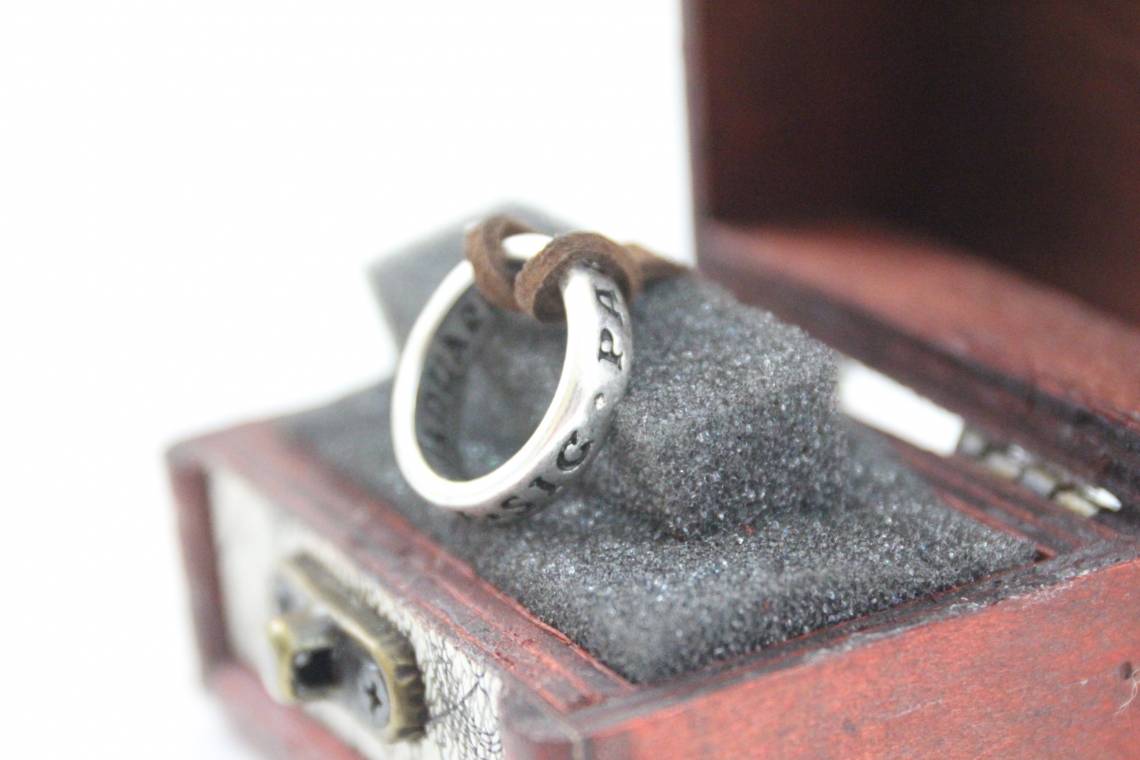 Sir Francis Drake’s Lost Ring – I had to do a little research on this one and found out that it is from a game that just came out, Uncharted 4 (I think) and I believe one of the main characters wears a ring like this. 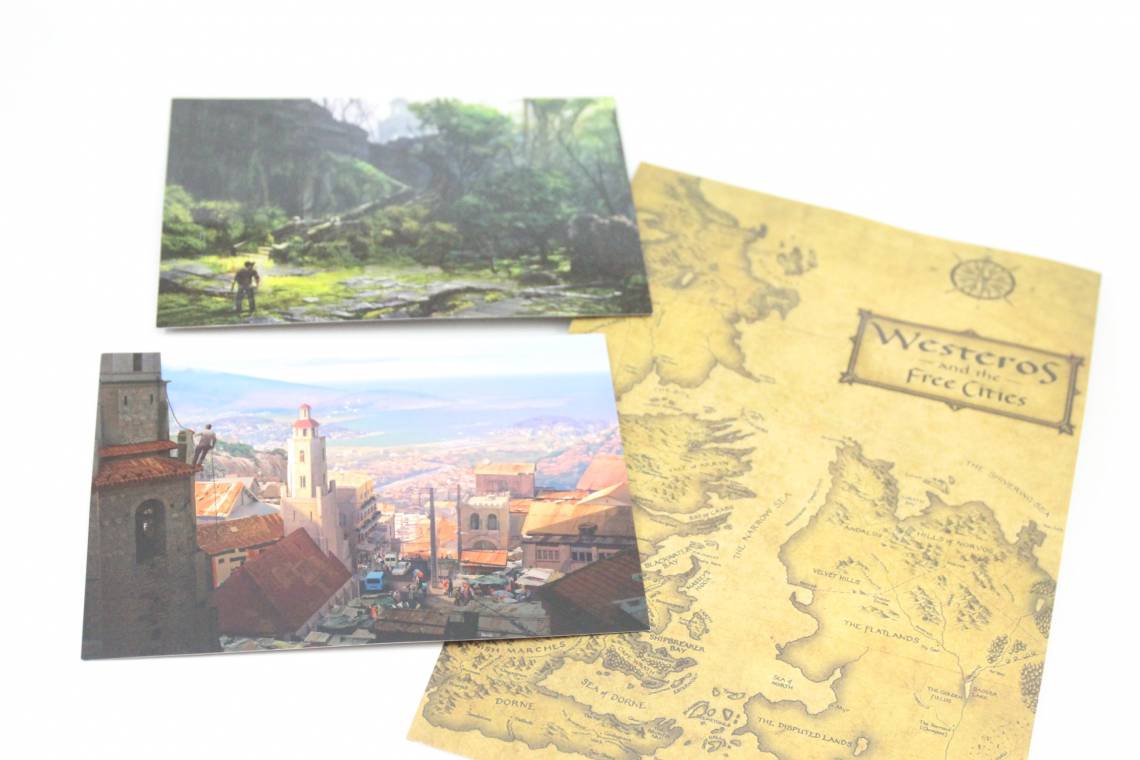 Westeros Map – This was kind of a bonus item this month as it isn’t actually listed on the product card, I think it was just meant to hold the shirt in place…..great idea. And once again I actually know what it is, seeing as it is another item from Game of Thrones.

Uncharted 4 Double Sided Mini Posters -These are Geek Fuel exclusives and they didn’t give us one, they gave us 2! And they are double-sided. 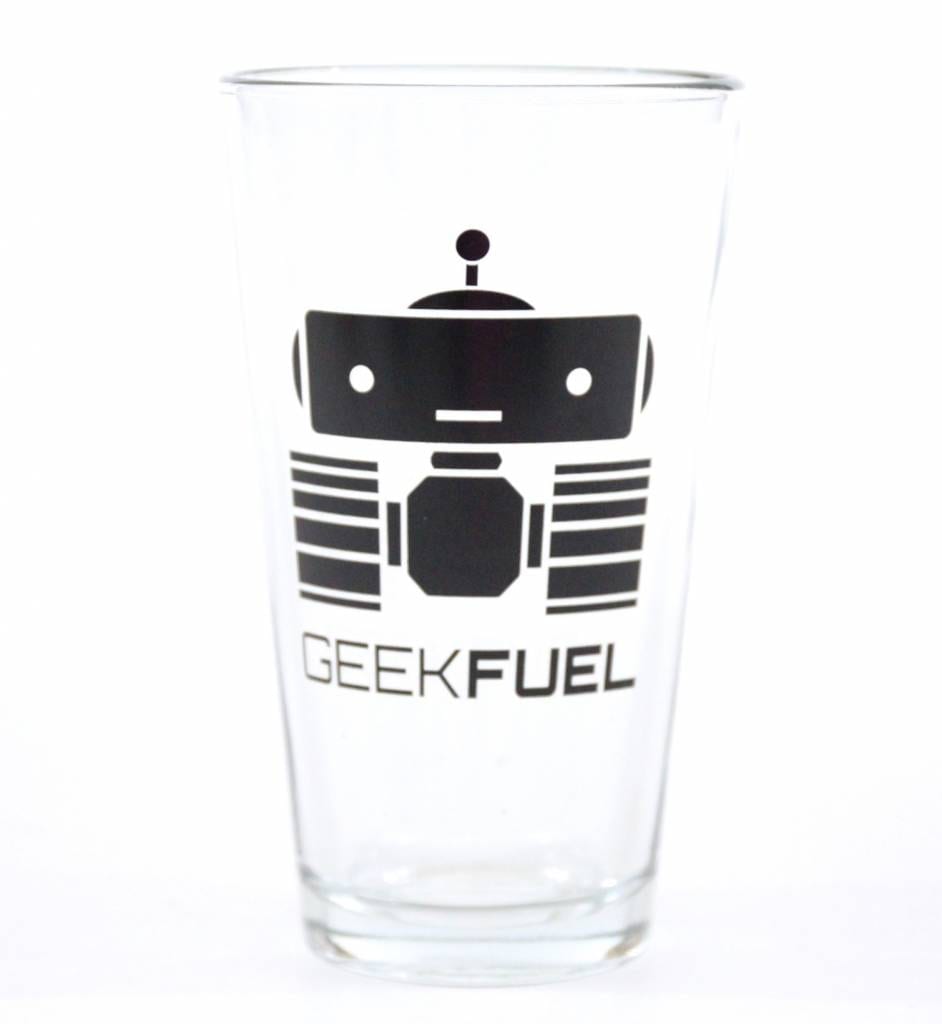 Refueling Pint – I actually really like to see branded items in subscription boxes, it’s something more boxes should consider doing. 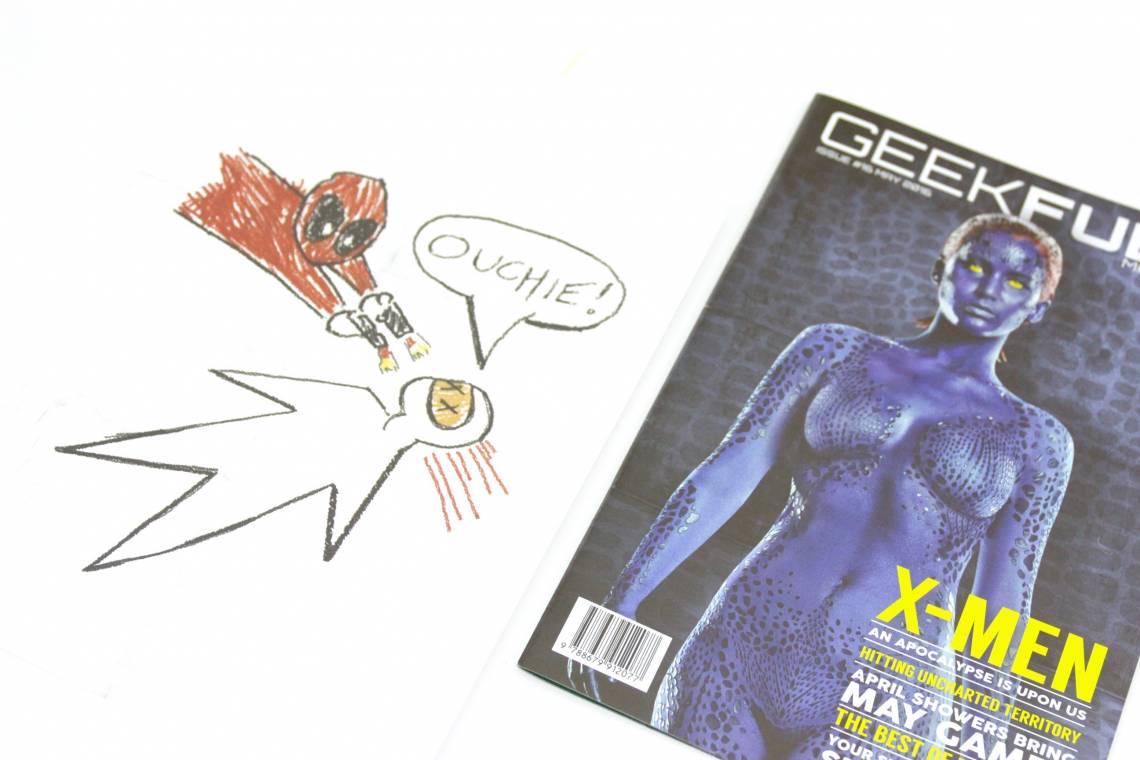 Deadpool “Ouchie!” Sketch – I’m not really sure what this is so I can’t say much about it. The product card says to display it where someone will see it and convince your friends that you may secretly be Deadpool. 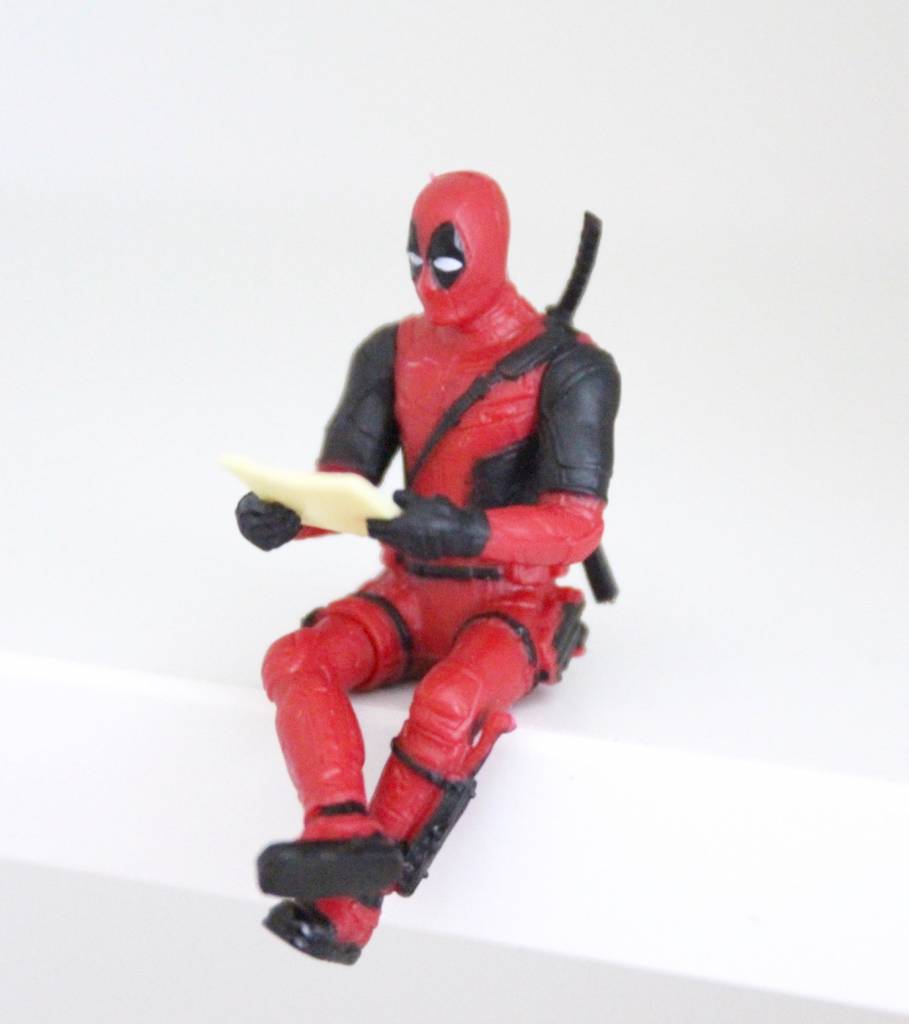 Deadpool Monitor Mate – This is an entirely new concept for me, I have seen figurines before, but I think this guy is supposed to sit on your monitor? I like that they included Deadpool products seeing as it is a pretty popular movie right now. 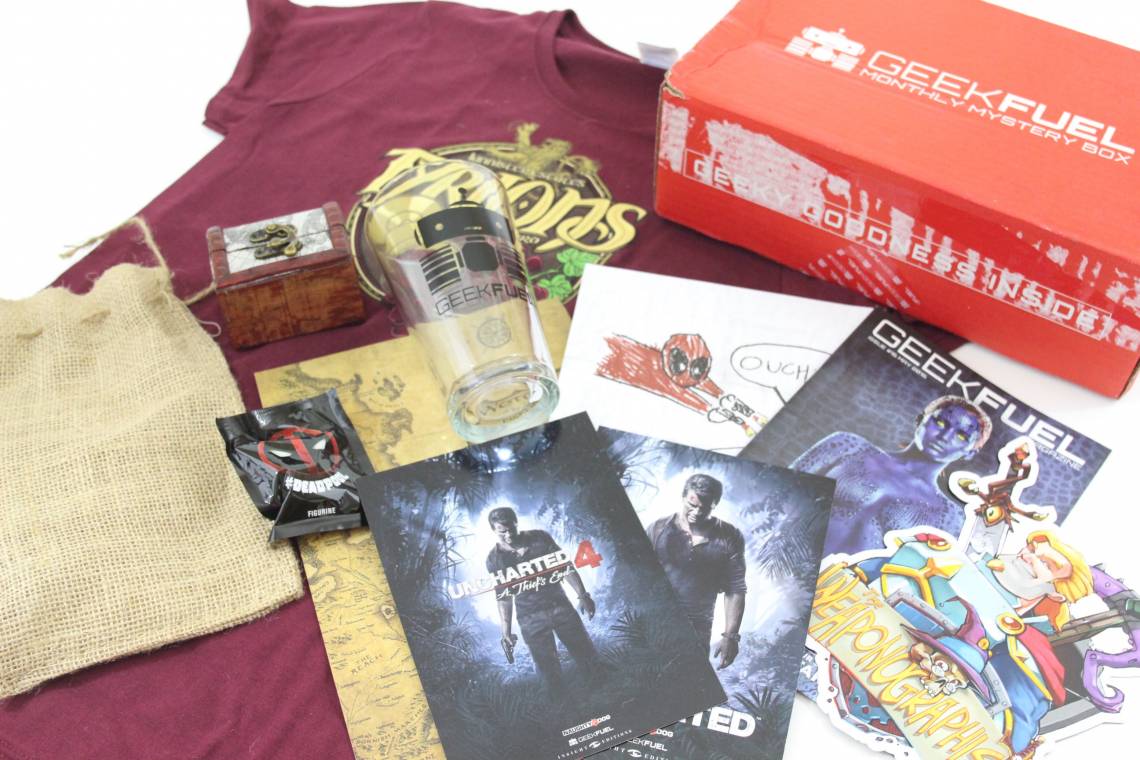 Thoughts: I don’t review too many geek/gamer boxes, so I didn’t really know what to expect with this one. I went in to this review with an open mind, and was pleasantly surprised. The items we received aren’t really my style, but that is to be expected. What I do want to point out though, is the fact that this box is done VERY well. I am extremely impressed with the packaging, the product card, the items included, and the fact that they do monthly giveaways and randomly insert bonus items in to some of the boxes. This month some lucky subscribers will find a Deadpool Blue-Ray DVD in their box, and I am SO jealous of those subscribers. I wish I would have received it in mine, the BF has been bugging me for the last month to watch it with him. Any who, if you are in the market for a geek/gamer box I highly recommend checking this one out, I think they have a great thing going on (says the girl who doesn’t know what Steam Games are).

What do you think of Geek Fuel?

Geek Fuel is a subscription box that delivers 8 to 9 unique and exclusive geeky pop culture products to your doorstep every three months.

Geek Fuel is a subscription box that delivers 8 to 9 unique and exclusive geeky pop culture products to your doorstep every three months.