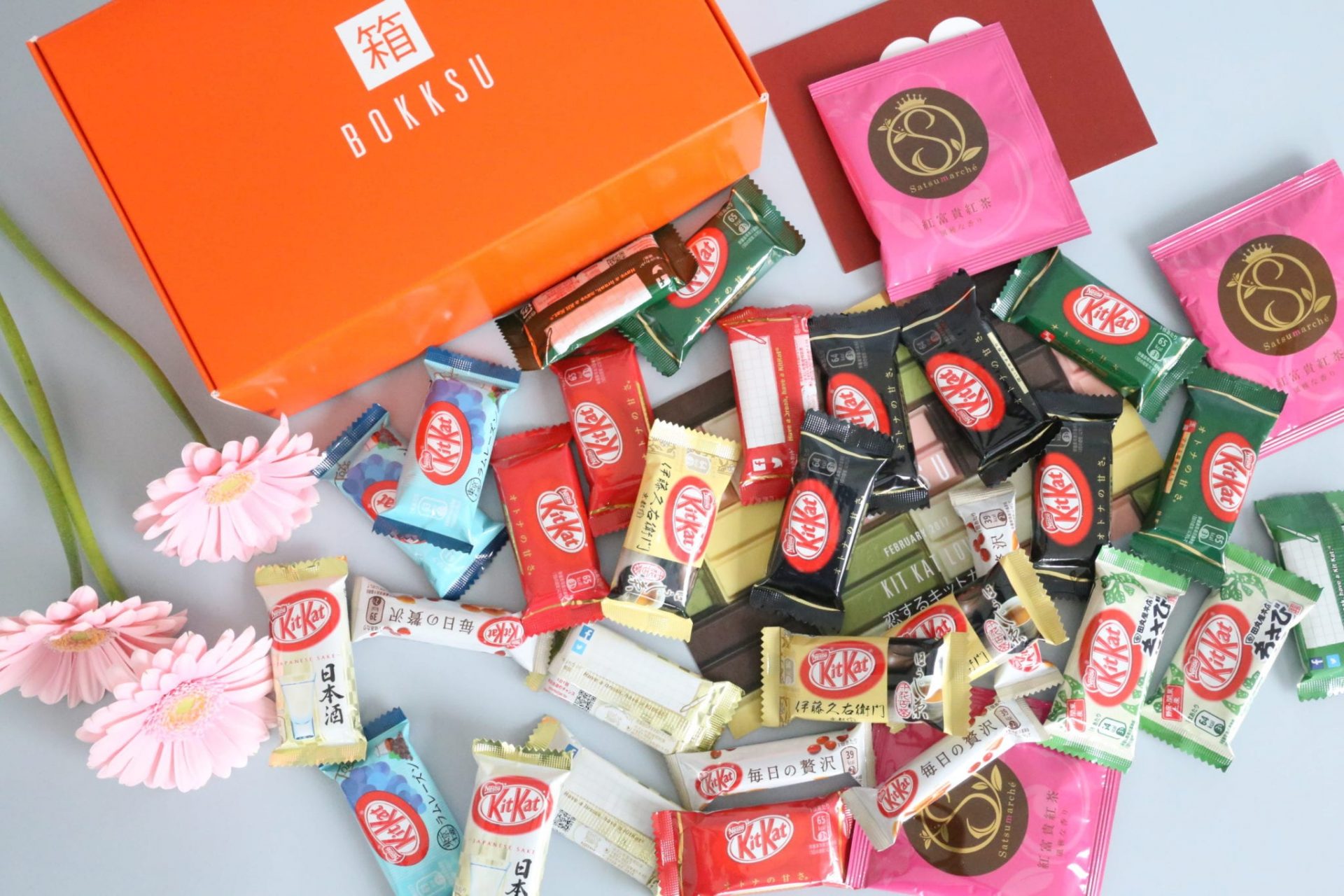 Bokksu is a premium subscription service for people to discover delicious snacks and teas from all over Japan. Having lived in and snacked through Japan, Founder Danny Taing curates a gourmet box for subscribers every month filled with authentic Japanese snacks and tea pairings. They kindly sent us this box for review. 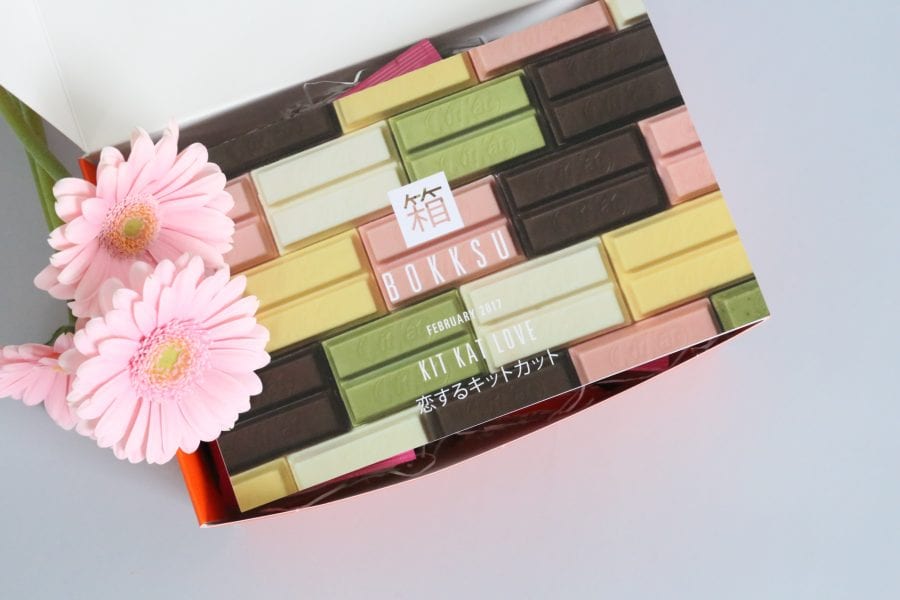 I have to be honest, Ashley and I have been looking forward to this box ever since we saw the spoilers almost a month ago. I hope all of the Bokksu fans out there ordered the February box because it looks like it is going to be the best one yet. 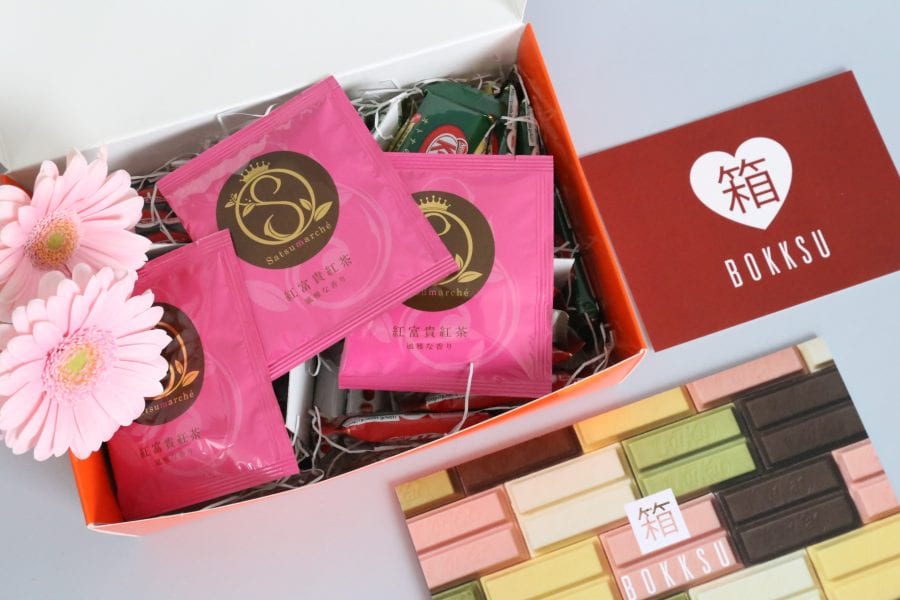 I have reviewed a few Japanese snack subscriptions in my day, and my favorite item has, and always will be, Matcha Kit Kats. Imagine how excited I was when I found out that Bokksu was dedicating the entire February box to Kit Kats! And not just Matcha Kit Kats. A selection of 8 different flavors of Japanese Kit Kats!! I already love it! 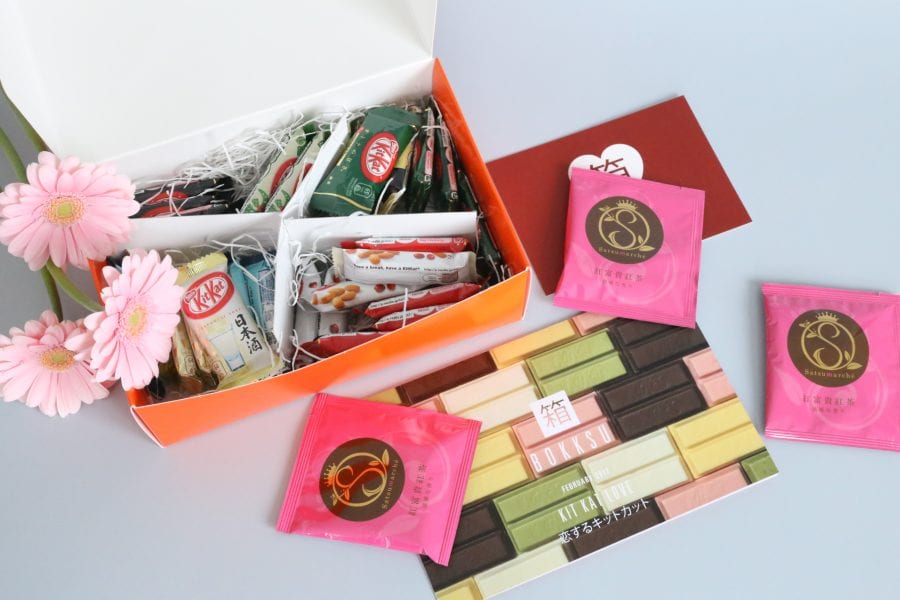 Kit Kats were first introduced to Japan in 1973. Since then, Japanese Kit Kats have exploded to over 300 flavors including limited, seasonal, and region specific editions! No wonder Japan is the second largest consumer of Kit Kats after England! Part of its popularity comes from the Japanese pronunciation of Kit Kat, which is similar to the phrase “Kitto Katsu” (きっと勝つ), which means “definite victory”. Thanks to this linguistic coincidence, Kit Kat is now ubiquitously gifted to hopeful exam takers all over Japan as a good luck charm. In times of sports events This month we’ll take you on a wild (but tasty) ride of 8 limited edition Kit Kat flavors from Sake to Wasabi. So sit back, have a break, and most importantly have a Kitto Katto! 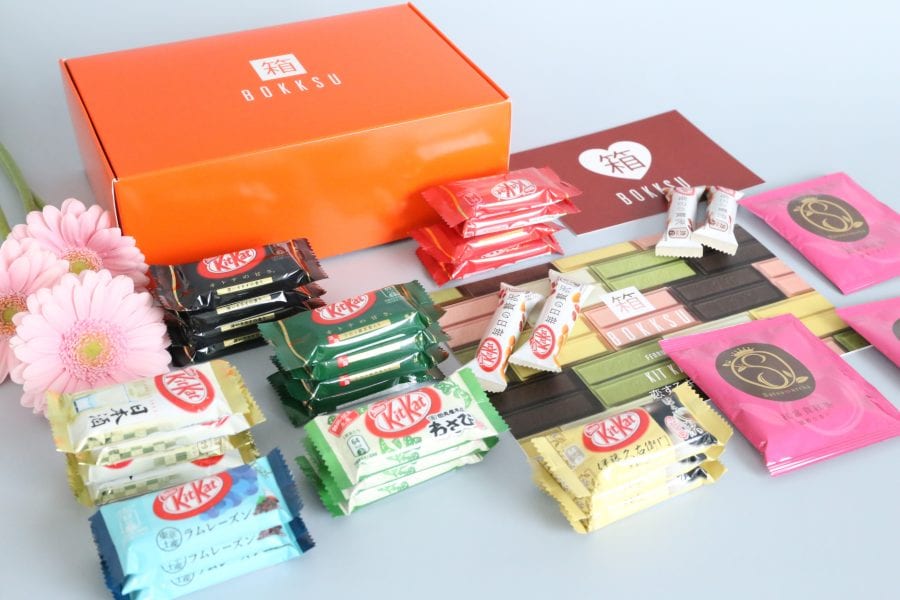 Let’s have a closer look at the limited Edition Kit Kat flavours we received in this month’s box: 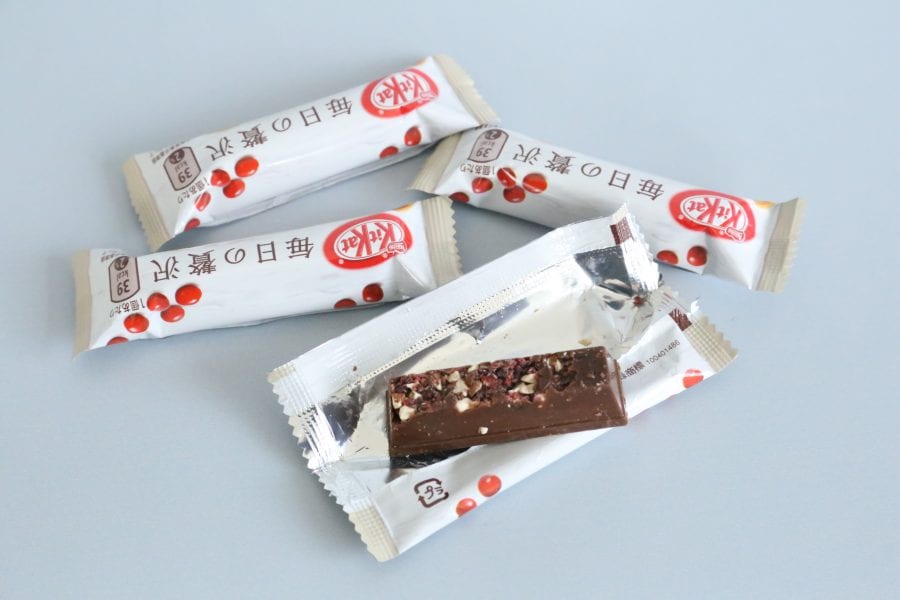 Chunks of whole almonds and cranberries are baked into a thick chocolate wafer to create this premium and delicious snack.

I was surprised to see that the almonds and cranberries were sitting right on top of the Kit Kat. It tastes like a fruit and nut bar, which I happen to love. The chocolate isn’t overly sweet so it’s a nice balance with the cranberries. 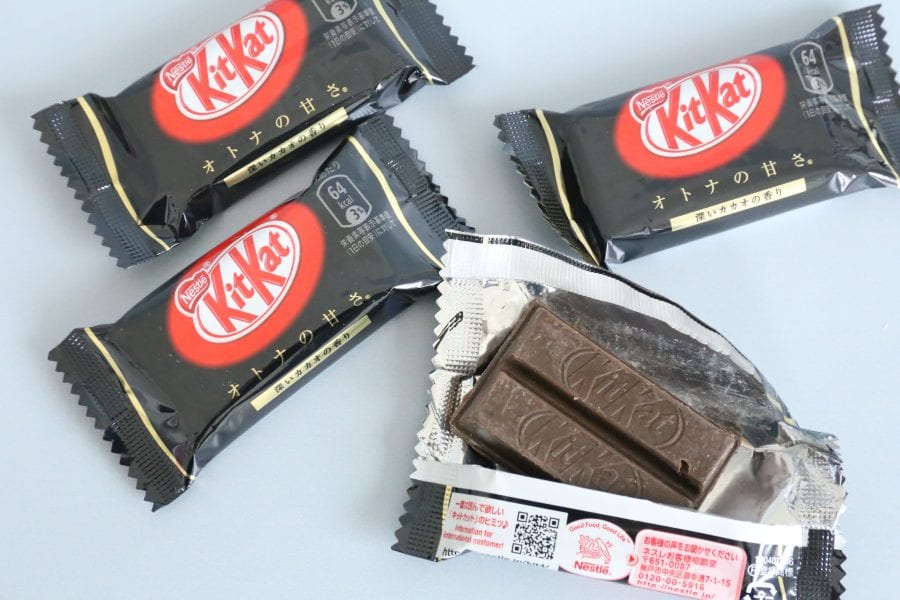 The original “Otona No Amasa” is the less sweet version of the regular Kit Kat. Added bits of dark chocolate cookie give this classic Kit Kat a pleasant crunchiness.

I love, love, love this one! The fact that the chocolate isn’t as sweet as the regular version means you can taste the cookie that much more. 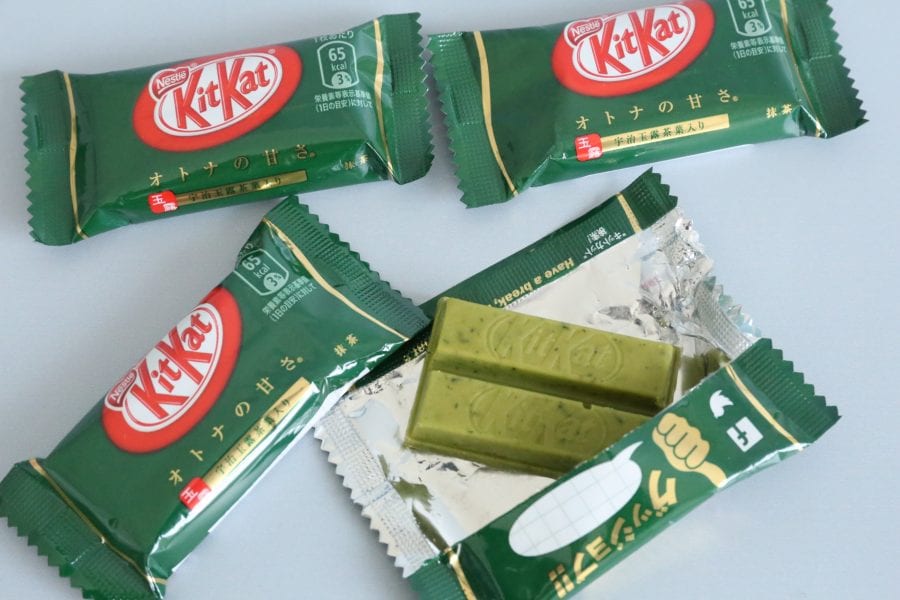 Oh my goodness! This was better than I remember. Some Matcha flavoured chocolate is too strong. This one is just right. You can taste the Matcha but it’s not overpowering. 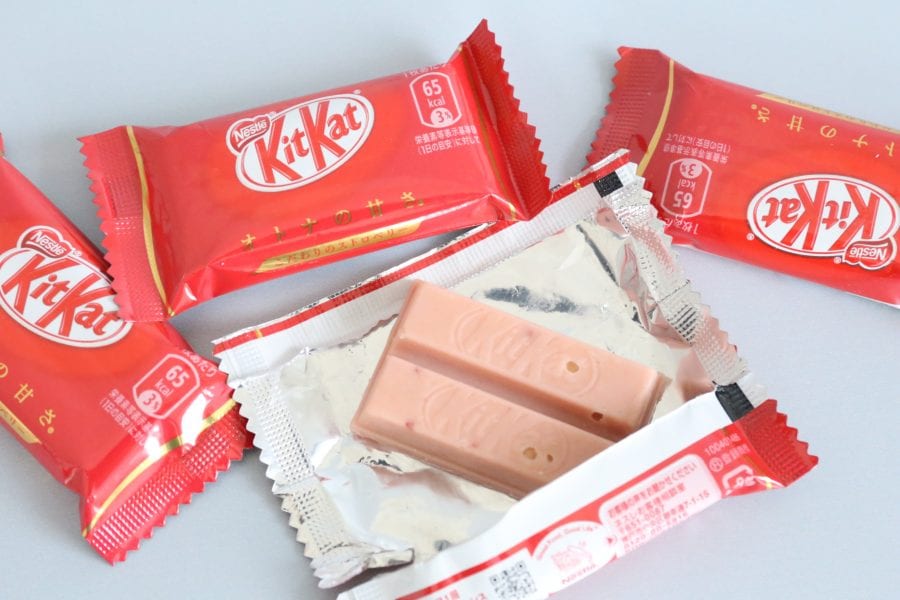 Compared to regular strawberry Kit Kat, this Adult Edition has a richer flavor. With the perfect balance of tartness and sweetness, it’ll make you think you’re sinking your teeth into a fresh strawberry.

Um…….amamzing!! I feel like it keeps getting better and better. The balance of tartness and sweetness is very apparent. They really do balance each other perfectly. I want to eat all the strawberry bars right now!! 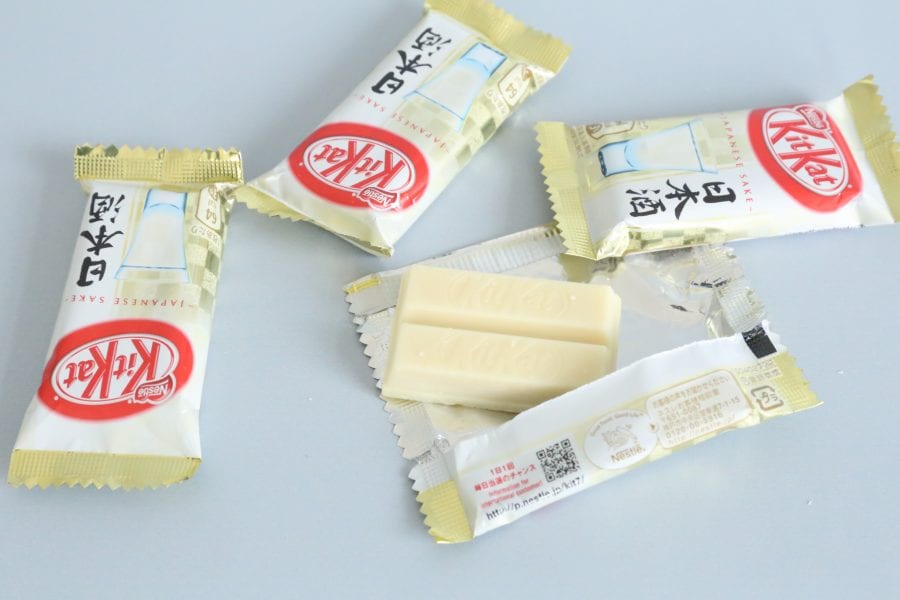 Kit Kat Sake launched in June 2016 and contains 0.8% alcohol! Wrapped in white chocolate, this elegant Kit Kat will give you a refreshing aftertaste of sake with each bite.

This smells SO good. When I was taking the photos it’s the one I thought I would end up liking the most, based on smell alone. It has a really unique flavor. I can’t quite put my finger on it. I really, really like it. 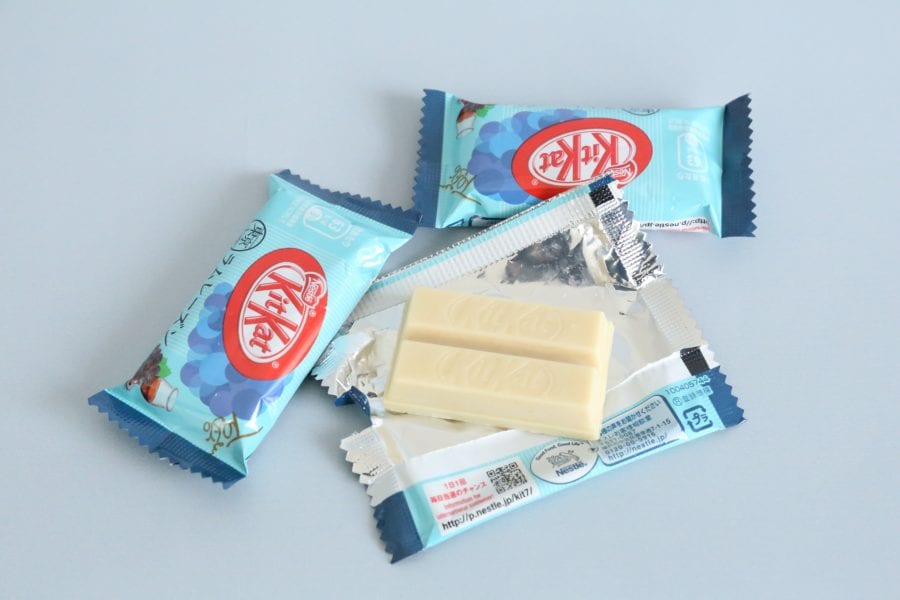 Only sold in the Kanto region, Kit kat Rum Raison has an alcohol content of .056%. It’s a sophisticated combination of rum and raisin, reminiscent of the fancy city life in Tokyo.

This reminds me of Rum Raisin Ice Cream. It’s pretty amazing, maybe just a tad bit too sweet though. 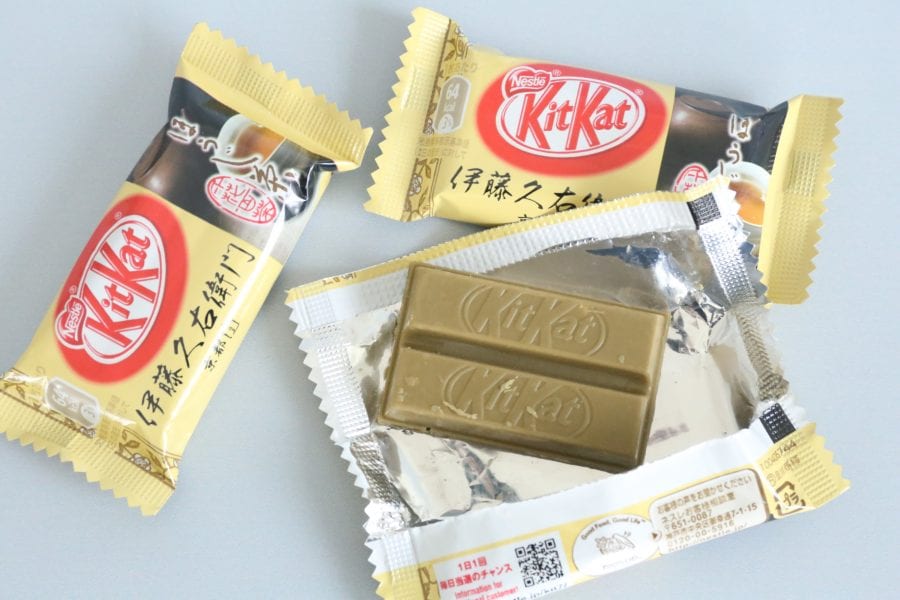 Only sold in the Kansai region, Kit Kat Hojicha is a collaboration between Kit Kat and Itohkyuemon, an artisanal Kyoto Tea Maker since 1952! Handpicked Hojicha (roasted green tea) is layered into the chocolate and produces a delicious, roasted flavor.

This tastes similar to the Matcha Kit Kat but you can definitely taste the roasted aspect. The matcha flavor is a little bit stronger, and there’s definitely an aftertaste. 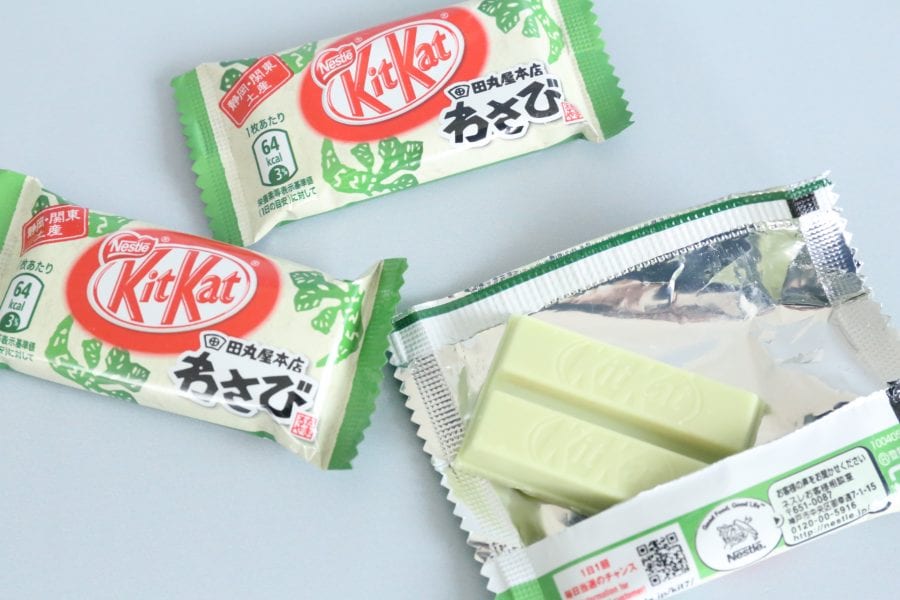 Kneaded into this white chocoalte Kit Kat is real wasabi from Tamara-Honten, a Shizuoka wasabi producer that’s been around for over 130 years! Enjoy the mild hint of wasabi in this Kit Kat that’s only sold in Shizuoka Prefecture and Kanto.

I was scared to try this one, but I couldn’t not try it. I was worried that there would be spiciness right away but there isn’t. There’s a bit of a wasabi aftertaste, but it’s still really good. 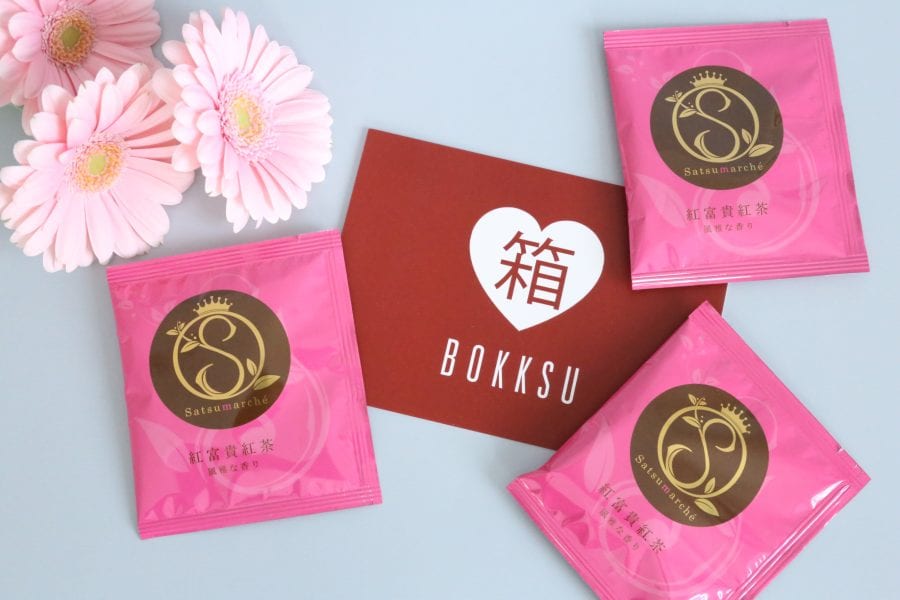 They also included some black tea. Pair this with your Kit Kats and you are good to go!

Benifuuki is a Japanese tea plant specially cultivated in Makurazaki City, Kagoshima Prefecture. Only young Benifuuki leaves are first harvested by hands, and then stored and fermented for 3 months in the dark at low temperatures. As the result, the tea is extremely high in methylated catechin content, which helps combat hayfever and seasonal allergies. To best enjoy the natural sweetness and mild bitterness, we recommend not adding any milk or sugar. 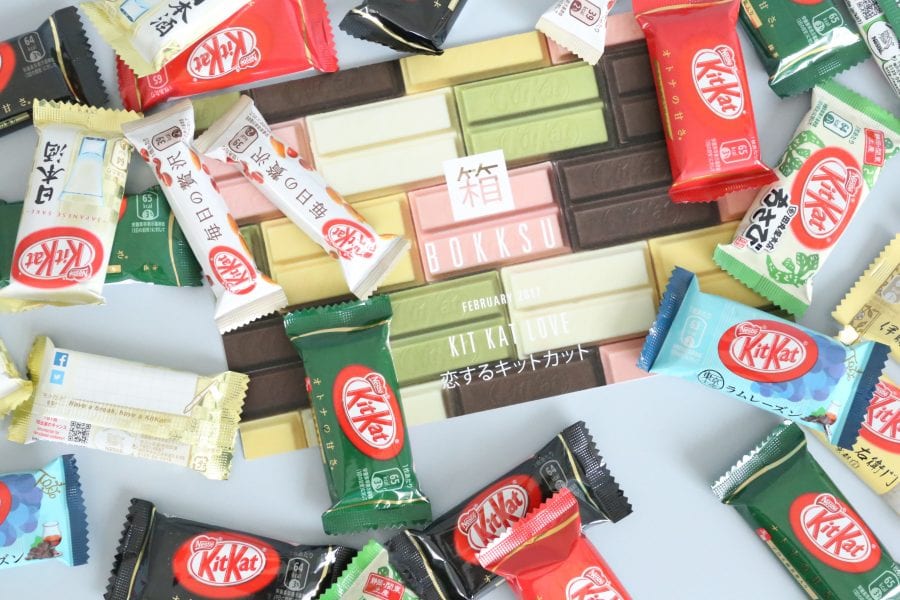 Oh my goodness. The February Bokksu box is the best Japanese snack box I have ever received! I am so impressed with this box, I almost don’t have the words to describe it. I think it was a really great idea to focus the entire box on Limited Edition Kit Kats. If they sold this as an individual box I would purchase 3 more of them. I don’t think I have said that about any other box I have reviewed, and I have reviewed thousands. I don’t even eat sugar and I enjoyed this box.

I sat the box in front of me while I wrote the review and had a little nibble of each bar. It was really fun to analyze the flavours and compare them to each other. I actually found that I could enjoy the flavours that much more by taking a small bite and savouring it. If you received this box I highly recommend you do the same thing. And the great part is…..we received 3-4 bars of each flavor, so you can do a taste test and then save the rest for another day. I can’t say enough about this box……..it’s a February favourite for sure!!!

Bokksu is a subscription box of premium Japanese snacks and teas delivered from Japan to your door every month.

Shipping: FREE
Ships to:
$25 per month (starting from) Coupon Available
Subscribe to Bokksu today!
Use code AYOB3 for $3 OFF your first box! Learn More about Bokksu »

Bokksu is a subscription box of premium Japanese snacks and teas delivered from Japan to your door every month.

$25 per month (starting from) Coupon Available Shipping: FREE
Ships to:
local_offer Use code AYOB3 for $3 OFF your first box! Subscribe to Bokksu today! Learn More about Bokksu » Review Bokksu